Armor and your Health

So, you just agroed an NPC or player and got hit, thus, losing health. How much health did you lose? It's guaranteed that the damage dealt by the opponent is not the same as the health you lost. This article will show you where that damage went, options to minimize your health damage and more. 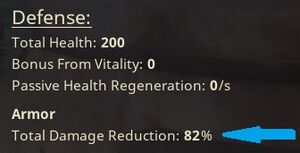 We all wear armor and that armor's total value is shown on your Inventory screen (left). If you tab over to the Stats screen you will see the effect of that armor as Total Damage Reduction = X% (right). As the armor value rises, the damage reduction also rises. So, better armor and you last longer and are able to fight more powerful enemies.

Armors are listed on the Wiki and if you view an individual piece the armor value is shown. Looking at each piece you can add the values and if you wear that armor, that total will be shown on the Inventory screen. From that, and your selection of temperature resistance, bonus attributes and aesthetics, you can choose what armor you want to craft or loot.

Didn't know there was any? Don't feel alone. Every point in Agility grants 4 armor, without wearing anything. So, if you max out Agility , you have an Armor value of 200 as a basis from which to add the values in your wearable armor. There is also the third perk in Grit, Iron-hard Muscles which adds a moderate amount of armor value. These will show in the Inventory screen as the sum total of both intrinsic and equipped armor. Since it is unlikely anyone would max out Agility, be aware there are buffs that add to agility, thus, your armor value, leading to, again, damage reduction. The intrinsic armor never decays like wearable armor does in Durability. The fifth perk in Survival, Bronzed Physique, reduces incoming direct damage by 10%, but is not armor and does not show up in armor value, it just happens.

Wearable armor comes in light, medium and heavy and each has its own benefits. With light armor, you can carry more, dodge faster and run farther, but you sacrifice defense. With heavy armor your defenses are pretty incredible and you can face tank quite a few bosses, but can't dodge their attacks well or carry off much of the loot. Medium is a blend of the above two and increases your defenses over light, and increases your mobility over heavy. Your choice is a matter of your most enjoyable playstyle.

There are various kits available that enhance some attributes of your wearable armor at the expense of other attributes. They are unlocked at various levels or the recipe is found in dungeons. You can use a

Thick Armor Plating that gives that piece of armor more, well, armor, but at the expense of durability. You can make them more flexible with a

Advanced Armor Flexibility Kit, using less stamina to perform certain actions, like climbing, at the expense of durability. You can choose to make the armor lighter with an

Armor Reduction Kit, again, losing some durability. Look through your recipes and see what fits the occasion. You may want a set for fighting and another set for climbing, or, you could mix and match, again to support your playstyle.

Most armor comes with benefits. Some add to your attributes, as regular light armor enhances your Encumbrance, other armors add to strength, agility, etc. You get to choose (even mix and match) those adds to complement your selected Attributes. For other considerations, you may even want to change your Attributes (respec) to balance out your selected armor. Why selected armor? Well, armor also has temperature characteristics. Some armor keeps you warm, other armor keeps you cool. Be aware it doesn't work like insulation on a house, more like your AC or heating unit. Two bars of cold will give you two bars cold protection, not just two bars closer to midway. Last, but not least, is aesthetics. How do you want the armor to look? Lots to play with and plenty of freedom to choose.

But let's return to getting hit. Your health damage was not equal to the damage output of your enemy. Your armor absorbed a part of that noted by the total damage reduction. That absorption was not lost, but spread across every piece you wear and reduces the 'health' of the armor, Durability. Using both you can see what happened to that damage output. When your armor Durability reaches zero, it no longer protects you and must be repaired (if possible), but the weight of the armor remains. Also, every stat goes to zero, temperature resistance and any bonus that armor had. Lost. It's not a degradation thing, it's either 1 or 0. If your armor durability is anything other than zero, you still have the full values mentioned. 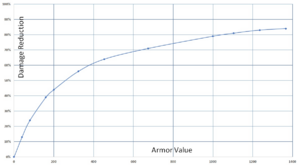 Now that we know how armor works, let's talk about the relationship between Armor Value and Damage Reduction. It's not linear, not a straight line, and is coded to incorporate what is known as 'diminishing returns'. Adding 1 point of armor at low values increases damage reduction more than adding 1 point of armor at high values. The chart to the right shows how that works. You may note there are 'bumps' in the curve; that's because the values shown on the two tabs are rounded. Internally, there are several more decimal points that can only be seen within the devkit, or by the devs.

So just how valuable is it to add 100 points of armor value? It depends on where you currently stand on the chart. Regardless of the resulting Damage Reduction, if it's a close fight, very valuable. You get to assess where you stand against a particular enemy and decide. Gear up and get out there!

So, let's talk about the weapon armor penetration effect on resultant damage. Recent (May, 2020) tests have shown that armor pen is directly subtracted from the damage reduction due to armor. For instance, a

Yoggite Cudgel shows a 24% armor penetration, so if your target has 80 armor (24% damage reduction) the full damage is applied, totally neglecting armor. While you may think 80 armor is a low value, take a look at some of the creature pages for their armor value. PvP is a different animal, and you may run up against that 1K+ heavy armored player or thrall. In this case, 83%-24%=59%, not so much. You may want to grab a weapon with higher armor pen and apply a

Of course, you gotta hit'em to kill'em !

We hope this helps you gear up and opens some possibilities that will help you conquer the Exiled Lands!