Bindings of the Dead

Ropes have dozens of uses, but the most common in the Exiled Lands is the binding and capture of slaves. Once an enemy is rendered unconscious, their ankles are bound with rope and they are dragged into captivity.

Ropes abrade on sharp stones and unravel often. This rope, however, will last for a very long time.

Found in Unnamed City at the scroll shelf in the map room. Trade fragments of power for random scrolls (One of them is the scroll for Bindings of the Dead).

This item can be repaired with a 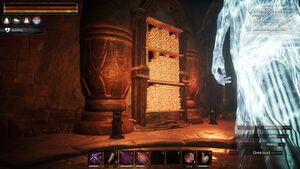