Feats are collections of crafting recipes in Conan Exiles. As such, they provide the cornerstone for access to recipes for weapons, armor, building and placeables, etc, all of which lead to experience.

Players get two feats for free when they first start at level 1, with an additional free feat at level 2. However, any further feats must be learned one of three ways: by spending Knowledge Points that are gained after each level, locating them somewhere in the Exiled Lands, or 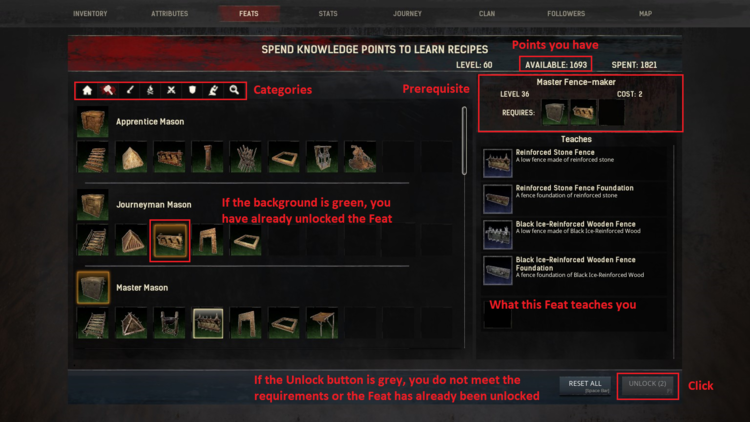 At character creation, you may select an initial Religion feat. However, selecting "Crom" as your religion gives you no feats. A first level character begins with Survivalist and Weaver. At second level, your character gains Stone Tools. All DLC feats are free, given the prerequisite feats are unlocked.

Each feat has a knowledge point cost as well as a certain level you must achieve before unlocking, and most require you to have one or more previous feats unlocked. As a player levels up, they acquire knowledge points. Knowledge points may also be granted by consuming

Fragments of Power or

Feats found on the world map cost no knowledge points to unlock, and have no real level requirement or prerequisite to learn. However, in many cases they will not be usable without unlocking a certain knowledge feat. For example, a discovered armor feat will require the

Armorer's Bench and the ability to make key components to make the armor, which is obtained via the Armorer feat.

Feats are also obtained through the purchase of Downloadable Content, such as The Imperial East or Blood and Sand. They cost no knowledge points to unlock, but most will only be usable by unlocking prerequisite feat(s). For example, DLC warpaints require the ability to make Warpaint, which is obtained via the Decorative Warpaints feat.

Feats are sorted into the following categories:

Religion - craft temples to venerate deities and receive their blessings

The following Feats have not been sorted into categories and are only accessible via the Search Tab: