Harlot's Journals are a series of books in Conan Exiles. They can be found throughout the Desert Region of the map. They are usually located near where there are ghost apparitions appearing. They appears to be journals that are left behind by an unlucky ex-Chieftan's pleasure slave telling the story of her adventures...or in this case, misadventures. 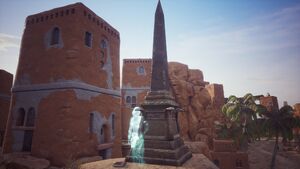 The Journal is at the foot of the obelisk down the path from the Shrine to Set.

The old chieftain, wretch that his is, lies dying now, and I can do little to help as I have no knowledge of the arcane arts or of medicine. My expertise in bedroom acrobatics will be of little use to the old fool - it might bring him closer to the brink, if not push him over completely. When he dies, I wonder what will become of me. Still - Chamiel, his son, is strong and not very intelligent. If I play my cards right, I may still have a safe haven here. I think I shall have to pay him a night-time visit to ease his weary mind and muscle. The thought of getting caught is enticing in itself, although the prospect of the wheel is less so. I shall have to be careful. 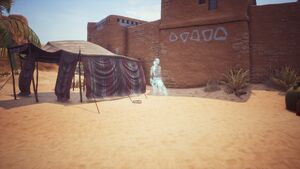 Harlot's Journal #2, on the east side of the Westwall Prison

Miserable bastard. The chieftain is infuriatingly strong-willed! He simply refuses to die. To make matters worse, I believe Chamiel has been bragging about our acrobatics to the camp guards, despite my pleas to keep our meetings a secret. The situation could be dangerous, especially if the chieftain recovers and hears the rumors. I may have to leave this place prematurely... perhaps I should head south, past the walls and toward the riverbed. 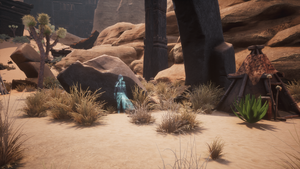 Harlot's Journal #3 is between a rock and a tent in the central area of Skulker's End.

It pays to have an ample supply of lubricants and oils handy. I managed to slip out of the shackles binding me to the wheel of pain during the changing of the guard. I ran through the desert until I could no longer see the village. Skirting the outer walls of the cursed city, I made my way to this place. For a wasteland this desert teems with life and plenty of souls in need of a warm embrace and soft words whispered into their ears. I won't settle here, however. The cursed city looms over me like a beast and I cannot relax in its shadow. I also have no intention of waking up to a scorpion skittering between my legs. I have enough of that horseplay from the locals. I will follow the river, and see where it goes. 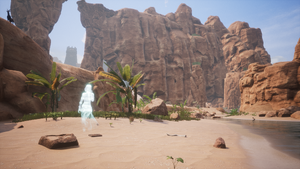 The journal is on the north west bank of the tributary.

Southern River at the mouth of the easternmost tributary, almost directly west of Scavenger's Berth. (Coordinates 82151 187240 -20108)

Had I known of the crocodiles, I would have taken my chances in the desert! The scaled monstrosities followed me at a distance and I thought I had lost them. Alas! I was not as lucky as I had hoped. One of the larger ones lunged at me from the water and tore my dancing silks, forcing me to abandon them for plainer fare. Thankfully, the crocodile seemed more interested in thrashing about with my torn clothing, than with me, so I was able to escape. I am exhausted, and will make camp here before I head further north. I have seen a spire stretching towards the sky. I will make my way there. 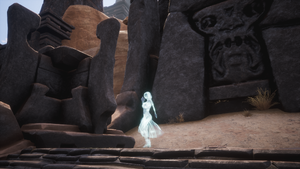 Harlot's Journal #5 is at the top of the stairs by a fire and a bedroll.

I have set up a temporary camp in the area. The tent threatens to blow away in the wind and the ruins whisper to me at night, so I dare not stay here for long. My arms and legs are sore for all the wrong reasons - travelling in this fashion is a strain on my constitution much worse than any man or woman I ever bedded in the bordellos of Zamoria. It may be wishful thinking but I believe I can hear occasional sounds from the north. There may be an encampment there. Tomorrow I will find out. I miss my bed in the village. I even miss my old chieftain. 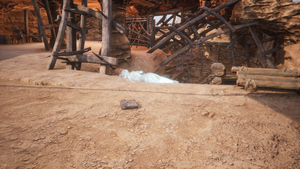 Harlot's Journal #6 rests on the central plateau of the Black Galleon just at the crest of a ramp from below.

How refreshing! Food and the company of men and women to my liking! I have been welcomed with open arms and robes. The men fight for my fancy and many have claimed me for themselves. My skills are useful here. A fluttered eyelash here, a crooked finger there and a mysterious smile at the right moment. They practically line up at the entrance to my small tent. "Protect me", I whisper as they enter my room and they swear eternal guardianship. "Shelter me" I plead as they pull the deerskin pelt over us both and they promise that I will never without. I could get used to this treatment. Yet - their leader watches me. She is strange, commanding the respect of her men but never bedding them. Always watching the ruins to the southwest. I wonder what horrors could there. 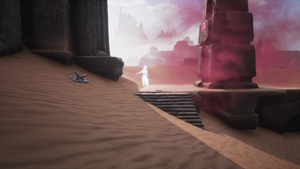 Harlot's Journal #7 is next to the Obelisk at the Sinkhole.

The encampment has been overrun by raiders and miscreants. I have yet again been forced out from my home. I made my way here, where I knew they would not follow and now I understand why. I hear the breath of the beast, even above the thundering sound of my own heartbeat. I will stay here no longer than I need to in order to make certain I have not been followed. Thankfully I managed to steal enough bread and water to sustain me for a short period. Yesterday night, I saw lights in the south. I will travel there. Perhaps the light from the fires will keep the hyenas at bay. 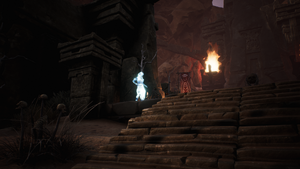 Entry #8 in the Harlot's Journal sits at the top of the entrance ramp to The Summoning Place.

I am wary of these people. I am unfamiliar with their customs and ill at ease in this place despite their warm welcome. My travels have taught me the importance of being careful. I had a dream last night after bedding the high priest. A dream of blood and water. An outstretched hand holding me in the skies only to then lay me down in a river. The eyes of the men here undress me hungrily...which is odd because their dark-skinned women go bare skinned all around. Perhaps it is what my first madame taught me - it's what they don't see, what they imagine, that fuels their lust. 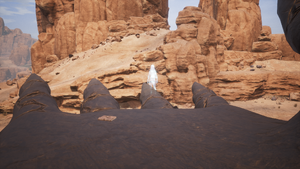 The final entry in the Harlot's Journal is set in the palm of the Hand of the Maker.

Cannibal savages. I have made my way here, as it seems they will not come close to this area. But the wretched bastards have beaten me still. Something courses through my veins, not the fiery visions of the lotus or the blissful dreams of the poppy, but a dark swirling maelstrom of pain that hovers beneath a tentacled shadow. I should never have drunk their infernal concoction. It is becoming difficult to move. Xath take them! I see them now what the dream foretold. A premonition. I go to the embrace of Zath willingly. Perhaps in his afterlife, there are beds of finest spider silk...