Razma's Journals is a series of notes left by Razma of Shem, the main female from the Intro Video to Conan Exiles. They are located in various places throughout the Desert and detail her experiences in the Exiled Lands.

South and slightly east from the south station of The Sentinels on a bluff overlooking the river valley. 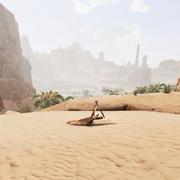 When my father died, I knew they would be coming for me. It was only a matter of time. What I didn't expect was this....to be crucified and left to rot on the edge of a wasteland that I have never seen before. It makes sense to me that the cowardly fools that they sent to do the job would not have the courage to kill me. they are mongrels, the cast off bloodlines of slaves and commoners, and such as they do not dare to spill royal blood. Instead, I was bound hand, foot and mouth and smuggled out to god knows where. They left me for the vultures, but I was rescued by a man. Such a man! Clean-limbed and bronze-skinned, I have never seen his like in the citystates that dot the meadowlands of Shem. He came to me as I hung from the cross and his icy blue stare was a challenge.

Did I dare to live? Now I crouch at the edge of this wasteland, once a daughter of princes, now a nameless exile in an unfamiliar land. In my hands, the shaft of the double-bladed axe that he gave me is a comforting weight. The answer is yes. I will live.

On a cliff over looking a river behind the north statue of The Sentinels.

I am not alone here. That was the first revelation that came to me as I crouched, shivering, on the banks of the river. There are others, ragged and broken men and women, who light bonfires and the shores of the river and huddle close together for warmth.

Fools. The light draws unfriendly eyes and I would never put myself at such risk.

My father taught me that the best way to survive was not to make the mistakes that other people make. Life is not always about choices we make, but about the foolish choices we avoid making.

But father is dead and I am alone in the darkness.

My father told me that there is something to be learned from all the peoples of the world. I do not yet know what these Darfari will teach me.

I was captured as I moved north from the river. They clubbed me senseless and dragged me back to their camp, thrusting me into a woven cage full of prisoners.

They've been dragging us out, one by one, to their sacrifice pits. The screams of the victims fill the air and the scent... my mouth waters and I hate myself.

Some of the other prisoners here are from further north. one of them claims to be a Stygian bounty hunter who came here chasing treasure. He says there is a whole city of them in the north.

And in the cage beside us is a woman who is dressed... like a pirate? Does that mean we are somewhere near the ocean?

I need answers. I've been so busy running. Surviving.

There's a loose branch in the weaving of this cage. My Stygian friend and I are working it slowly loose and then we will vanish into the night.

I realize now that I have been foolish to avoid others. If I am to escape these exiled lands, I need to find people who know what the stakes are. I need other people.

I walk among giants.

My Stygian friend (his name is Jakkad) and I found this place after we fled the Darfari. I can't even say for certain we managed to lose them - they shied away from entering this place. Perhaps they consider it sacred.

When we came to the entrance, out bracelets flared and the tablets by the great door were lit from within by a light like devil's fire.

A voice spoke within our minds, alien, arrogant. It spoke and in my mind I saw the black spires of an ancient city and the stately, unearthly creatures that dwelt within.

I fell down in a faint, dreaming as one who has inhaled the pollen of the Black Lotus.

In my dream, I walked with them along black stone avenues and sat with them as they communed with primordial beings and took counsel with blasphemous minds from outside the veil. I watched as they observed humans entering their lands, at first amused and then alarmed.

I watched as they changed, hardening their hearts against the humans who came to them, begging for refuge. They sealed the borders. They enslaved the humans that they captured. They bonded them, with these bracelets we wear today.

When I awoke, hours later, Jakkad and I spoke of what I had seen. Apparently, he had none of my visions, just heard the voice in his mind, warning him to stay away from this place.

It is becoming clear to me that there is more going on here than just the politics that I learned at the feet of my foster-father. There are answers to be found. For those who would seek.

I think I must be dreaming. I visited pirates today. Pirates! In the middle of a desert!

It's as ridiculous as it sounds. Landlocked pirates who built themselves a ship of stone and iron on a mesa in the middle of a canyon. They dress in pirate garb and call themselves "The Black Hand".

They claim to be searching for a way out of the Exiled Lands, the same as Jakkad and I, but it doesn't seem as though they have made much progress. There was a lot of talk about hidden maps and secret treasures. I did not talk to their leader, the Butcher of Khwarizm, but I saw her from a distance. A formidable woman. Whatever these fools who follow her think, she has a real plan.

Jakkad and I have agreed to continue west. According to Jakkad there are more ruins out there - an entire city! - though he claims that it is dangerous. But beyond it, in the northwest is the city where his people can be found.

Jakkad is gone. Swallowed by the darkness and desolation. A winged demon screeches a haunting dirge as it flees with my companion towards the stars.

Ever since we took our first steps into this city, we knew that something was waiting for us. The darkness is a tide, lapping at the shore of my sanity, eroding it. Blood seeps from wounds I didn't know I had.

The ruins cast insane shadows on the landscape and they cast a shadow on my mind. The past and the present run together in my mind and--
I am slave rushing to help my master and--
I am a woman screaming in the ruins and--
I am a god planning wars and wickedness and?
I am a sandstorm scouring the lands and-

I don't know where they found me, these rough people dressed in the skins of hyenas. They carried me back to their camp - somewhere north of the city, and left me sleeping on a pile of furs by one of their tents.
I don't think they expected me to wake up.

I've been watching them while pretending to sleep. There is something very strange going on. Their body language is wrong. I grew up on the streets of Asgulun and I could read the body of a haggling merchant before I could walk.

But these people... They remind me of the mangy curs that used to wander the streets, begging for scraps. They stand too close. They sniff at one another. When one of them shouts, the others cower.

I need to get out here.

They are gathering in the old arena among the ruins, howling like hyenas. They are performing some ritual. A naked man is cloaked in blood and some hyena skin.

I dare not waste this chance. I must slip away.

I will go west and find Jakkad's people. I'm going to need their help.

Jakkad's people were skeptical when I first stumbled into their city. But they knew his name and then... Shemites! My countrymen! Familiar faces. Some recognized my face, but I quieted them with a glance.

It has been good for me to be here. I have been able to rest and relax. The Exiled Lands are a fearsome place, but the people have managed to build something.

I have spoken with men who have been here for a score of years. they told me of the Purge, when soldiers ride through the land, slaying and pillaging. They have told me of the sandstorms that arise with such fury out of nowhere and disappear just as quickly.

I told them of the vision I had in the ruined city. Of the room, nestling beneath the secret heart of the ruins. Of the map, which shows the land that traps us. Of the gems, which can free us all.

They've agreed to send an expedition. I will lead them into the ruins.

I leave the last page of my journal here. My journey thus far has been one written. Action speaks louder than words.

May we never meet again in the Exiled Lands.