This disambiguation page lists articles associated with the same title. If an internal link referred you here, you may wish to change the link to point directly to the intended article.

A Rhino is a creature and potential pet in Conan Exiles. 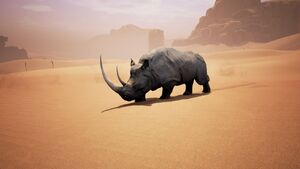 A large, heavily built plant-eating mammal with two horns on the nose and thick, folded skin, the rhinoceros will happily charge, trample, and throw those that wander too close.

Rhinos are predominantly located in the Savanna and some can be found near these established locations:

Items and resources dropped may depend on the specific Rhino that is harvested and/or tool that is used.

To obtain a pet rhinoceros, the Player must first capture a wandering

Animal Pen to raise it.

A Calf can grow up into 1 of 4 variants:

Additionally, 1 variant can be selected by combining

Turanian Fodder with one of the above Rhinos prior to placement as part of the Treasures of Turan DLC: