Crafting fortifications is the beginning of a coherent siege strategy but it is the least interesting and least creative part of the equation. A good fortification includes structures that are built for a specific purpose - such as murder holes created to lure enemies through a gauntlet of deadly traps.

These siege cauldrons, filled with boiling tar, are simply another tool in the arsenal of a siege engineer. They can be used to discourage eager climbers or to wreak havoc on enemies trapped in a murder hole.

"Attaching the siege cauldrons to the crenelated walls will let you pour boiling oil over anyone trying to scale your castle walls."[1]

Despite the Journey Milestone stating that you pour boiling oil from the cauldron, oil is unable to be used with the cauldron.

You will need to use

Repairing Siege Cauldron requires up to: 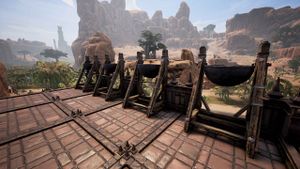