The Sunken City is a dungeon in Conan Exiles. 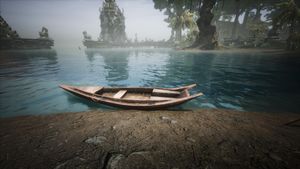 The Sunken City can be entered by interacting with a small rowboat on the Northwest shore of Dagon's Embrace. TeleportPlayer 354007, 141782, -20106

The Watcher Above is a Cultist of Dagon in Lemurian Royal Armor and wielding an axe. On an altar near his location is the feat Ancient Lemurian Axe.

The Ritual Keeper is a Cultist of Dagon in Lemurian Royal Armor and wielding daggers. To the right of the portal where Dagon's head appears is a Lorestone teaching Daggers of Dagon.