The Outcast is one of the Religion Trainers in Conan Exiles for Ymir and the only friendly Frost Giant the player will meet.

He's highly intelligent, philosophical and has had visions of the Outer Void.

Quite the rare specimen, most frost giants are far more simple minded, their leader, Hrungnir of the Frost detested it so much that he beat the outcast's skull until fragmented bones avalanched over his eyes. He was dragged to the outskirts of the North and left there, banished from his kin.

The Outcast has several interesting, and startling things to tell the player, bringing a new perspective on the Exiled Lands.

The Outcast can be found at the following locations:

The Outcast says a number of strange things to the player. One line seems to be inspired by H.P. Lovecraft's poem, Nemesis. 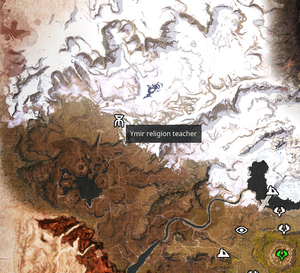