This disambiguation page lists articles associated with the same title. If an internal link referred you here, you may wish to change the link to point directly to the intended article.

A Hyena is a creature and potential pet in Conan Exiles. 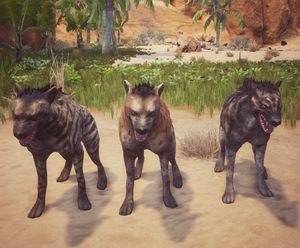 An aggressive cross between feline and canine, these scavengers, while troublesome on their own, are made all the more threatening as they are often found in groups. Should a weary wanderer stumble upon them unprepared, they should flee whence they came for fear of being overrun.

Hyenas are predominantly found in the Desert and River regions including near these established locations:

Items and resources dropped may depend on the specific Hyena that is harvested and/or tool that is used.

To obtain a pet hyena, the Player Character must first capture a wandering

Animal Pen to raise it.

A Whelp can grow up into 1 of 3 variants:

Additionally, 3 variants can be selected by combining

Yamatai Fodder with one of the above hyenas prior to placement as part of the Seekers of the Dawn DLC:

Undead Hyena can be crafted via the